Our Coat of Arms has changed, but the motto has remained for over 60 years.

The Coat of Arms of the Universidad Popular de Colima (People’s University of Colima), now called Universidad de Colima, has undergone some changes in order to adapt to the time. For more than six decades, the motto has been: Estudia-Lucha-Trabaja (Study-Fight-Work).

The elements, emblems, mottos, and other inscriptions of the first coat of arms of the University of Colima exist thanks to the Professor Ruben Vizcarra who, as the author, received the opinion of the engineer Juan de Dios Batiz—founder of the Instituto Politécnico Nacional (National Polytechnic Institute)—, official of the technical area of the Secretariat of Public Education at the time.

In order to design the coat of arms, the Professor Vizcarra requested the assistance of a draftsman from Veracruz, Mr. Salvador Pruneda, who had been his fellow soldier in the Constitutional Army.

There were two projects presented to the Colonel Pedro Torres Ortiz, governor of the state of Colima, who chose a round design with a dark circle at the center and something similar to a ring around, which at the top held the motto Estudia-Lucha-Trabaja and as complement had Universidad Popular de Colima at the bottom.

In the inner part of the circle there was an open book with two bookmarks and the initials V.P.C. written from top to bottom on the left side; while in the right side, at the top of the page, there was the word “Colimán.” 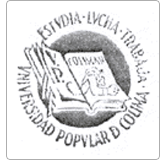 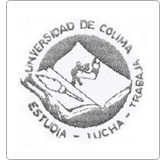 The engineer and architect Rodolfo Chávez Carrillo, Constitutional Governor of the State, promoted before the local Congress, the issuance of the Decree No. 88 of August 27, 1960, by which it was issued the Organic Law that established the name of University of Colima, instead of People’s University of Colima. Consequently, the Coat of Arms was modified as follows: The inscriptions circumscribed to the circle changed place, appearing at the top: Universidad de Colima, and at the bottom: Estudia-Lucha-Trabaja. The letters V:P:C: were suppressed, and a torch was printed instead; in the page of the right, the word “Colimán” was removed.

When the autonomy was achieved, the official stamps lasted for a few years, using the same coat of arms at the side of the signature of the correspondence, but an eagle was printed at the upper left side of the official paper, with the wings outstretched, the head in profile and the body formed by two Swiss shields, one inside the other, in between the upper inverse edge and the ogive it reads: Universidad de Colima; and in the bottom edge: Estudia-Lucha-Trabaja. At the inner space of the shield, the open book with the former emblems was kept, but the bookmarks were removed. 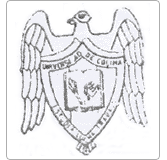 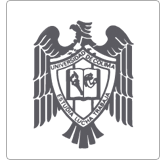 Over the years, said eagle changed to its improved current form, which shows its profile parallel to the wings, with its feathers as a dark silhouette, and the train formed by five feathers at the inner end of the blazon.